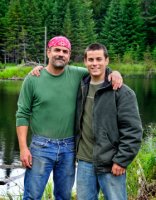 Mentoring is an informal process of one-to-one listening, sharing, coaching and guidance with another initiated man to support your journey. It's a great way of staying open, remaining centered, exploring your vulnerabilities safely, being supported ... and making a deep male friendship. If you're not comfortable with the word 'mentoring', then just substitute an alternative, such as buddy, guide, soul-friend, companion, or whatever works to make this real for you.

We have some general guidelines for mentoring, but the form and practical arrangements are open for you to discuss and agree with your mentor or buddy. Most mentoring takes place by phone or skype call; some men choose to meet up occasionally, if they are not too far apart. Typically, men make contact with each other every one or two months to "check-in" - but the frequency is very much up to you. You can also agree on a two-way buddy relationship, perhaps splitting the time between you, or alternating who is the focus in each call. Some men also develop three-way 'triangular' support networks where A buddies with B, B buddies with C, and C buddies with A.  Mentoring helps you to stay open and present to the continuing process of self-awareness and authenticity that begins with the Rites and continues for the rest of your life.

We have a group of experienced men willing and ready to be your mentor or buddy. There is no fee or payment for mentoring - this is an entirely voluntary arrangement. (You could easily pay £50-£100 per session for this form of deep accompanyment in the professional world.)

We deeply encourage ALL men to continue drawing upon relevant and appropriate support and guidance as you journey through life. This may take the form of mentoring, spiritual accompanyment or guidance, personal counselling, or similar arrangements.

Please use the Journey of Illumination option on the Contact page to be put in touch with one or two mentors / buddies. You can then discuss what you want with them before making any decision. For further information, please read our mentoring guidelines.

What men say about their mentoring

My soul brother David:  I first met David at our shared MROP experience in 2011. I thought “now there is an honest man”. It took me a full year to muster the courage to suggest to David that we meet and chat. What I didn’t really realise in the moment was that in offering my support I was really also looking for his support. And so we meet and walk and talk. Our walks sometimes end with a coffee, sometimes with a pint of beer but always with a satisfaction that I had been with a real man in a real conversation.
Paul S, Elder

I’ve been having approximately 6-weekly buddy calls with another man on the Journey of Illumination. We had been paired up at a Moot where we were encouraged to stay supporting each other on Skype by reflective listening to each other’s life stories. He had trained in psychotherapy and counselling. I have a grown up family and am twenty years older, so there were contrasts in our outlook which enlivened our dialogue. What was important for me in these exchanges was the focus it laid on centring practice and on each other’s developing sense of mission.
Peter F, Elder

An imminent mentoring call recently provoked me into questioning the notion of mentoring in the Journey of Illumination (JOI). I was asking, “What am I doing?” and “Why am I doing it?” The Journey of Illumination began for me, and others, following the Rites in 2008. The notion of mentoring was introduced to me at Deal, Kent in 2010 at a gathering of men who had completed the Rites.
My memory of that gathering is that we spent much time in pairs, walking in the woods and in the gardens of the house. We were sent off “Two by Two”. One walk in particular I remember was in silence around the gardens of the house where we stayed. At one stage we closed our eyes and allowed ourselves to be led.
Before we left we were partnered with another man with whom we would make contact by phone. We would become mentors. The instruction was that we would take half an hour or so to simply listen to the other man. No fixing, just listen and comment where it was okay to do so.
We were given an icon which had been laminated and obviously meant to last. It was of two men side by side, one with his arm around the others shoulder, on a road. That icon has sat on my desk since that day.
There was a period when I was a mentor but was not being mentored. This was a mistake as I slipped into my “helper” role without experiencing my own journey. It was a good mistake now rectified.
My questions were answered in that mentoring session. There was someone beside me on the journey. There was someone who knew that the Rites had a lasting effect and that the journey would go on. Often alone on the journey, the mentoring sessions would let me know that there was someone who knew what I was talking about. There was someone listening and knowing and for a while, sharing the road.
Peter S, Mentor

I have through my life had supervision, counselling, hypnotherapy, spiritual direction and sponsoring, and each has worked in different ways and I have found value in each at the time. As a guy who lived almost entirely in his head well into my 30's I kept the reins tight and only when broken was able to let go.
I know I need individual men I trust with whom I can be truly open and honest. With other men on the journey I am happy to be as open and honest with them as they want and if they are able to reciprocate that is fine. Meeting preferably face to face but also to a lesser extent on the phone in all 1-to-1 meets like this there is a 3rd present and this is communion. What I don't offer is counselling, instruction or direction.
Johnny G, Mentor

In recent years, I have had both a spiritual director and a mentor. Before each session or call, I’m nearly always somewhat tense, wondering what I’m going to say, what I might reveal about myself, and what response I might elicit. Sometimes I’ve even considered postponing the contact. Yet always – and particularly when I’ve been most fearful of it – it’s been insightful, helpful and re-affirming. I’ve been listened to and accepted as I am; I’ve found ways forward with my own dilemmas; and I’ve grown into the man I am today.
Tim P, Elder

Anam Cara means “Soul Friend.” Anam is the Gaelic word for soul and Cara is the word for friend. In Celtic tradition, an Anam Cara is a teacher, companion or spiritual guide. With the Anam Cara you can share your innermost self to reveal the hidden intimacies of your life, your mind and your heart. This friendship cuts across all convention to create an act of recognition and belonging that joins souls in an ancient and eternal way.

Love is the threshold where the divine and human ebb and flow, one into the other. Love is the most real and creative form of human presence. An expression of human consciousness, this love includes a depth of awareness and reverence for presence.
Where consciousness is dulled, distant or blind, the presence grows faint and vanishes. Therefore awareness which brings integration and healing, is one of the greatest gifts of this friendship. As a result, you look, and see, and understand differently. You refine your sensibility and transform your way of being in the world.

The Anam Cara is a loved one who awakens your life in order to free the wild possibilities within you.

Now available
Robert Davison shares 26 poems which are strongly influenced by his decade-long connection with the Male Journey. In this collection he reflects on ... more